NUN RUN for the Sisters of Loretto in Pakistan

Run with Your Doc

07/03/23
Registration is currently Closed. You may still register at either packet pick up on July 2nd at Bluebird Running Company - Noon til 4pm or race day starting at 630pm till 730pm You can still register at either : PACKET PICKUP on July 2nd from Noon till 4pm at BlueBird Running company @ 300 Main St or DAY OF RACE starting at 6pm till 730pm

The 2023 Michelob Ultra El Paso Marathon will highlight the historic sites of El Paso County, including the San Elizario, Socorro and Ysleta missions, the Playa Drain trail, and the El Paso Coliseum.
The marathon course through the Mission Valley returns for a second year Feb. 12, 2023, in a runner-friendly flat course that goes through some of the most interesting communities of the El Paso region.
The race begins at San Elizario High School, which is situated in the town of San Elizario, the town credited with hosting the first Thanksgiving in what is now the United States in 1598. San Elizario was also the original county seat when El Paso County was officially declared in 1850. The race passes by San Elizario Chapel in the town plaza, near the original jail cell that Billy the Kid broke into to free his friend, Melquíades Segura, in 1876.
From San Elizario, the race continues through Socorro, one of the original communities of El Paso County which was founded in 1680 by Piro Native Americans seeking refuge from the Pueblo Indian Revolt in what is now northern New Mexico.
Runners pass by the picturesque Socorro Mission along the Mission Trail before continuing on the road to the community of Ysleta. Founded in 1682, Ysleta is home to  the Ysleta del Sur Tigua tribe and site of the Speaking Rock entertainment venue. The Ysleta del Sur Pueblo is the oldest community in Texas; the Tigua Tribal Council is the oldest government in the state.
From Ysleta, runners continue to Ascarate Park and Lake, one of El Paso’s oldest community parks and its largest outdoor aquatic area. The 420-acre park features lakes (once a loop of the Rio Grande), a golf course, swimming, fishing, and parks for community sports.
Finally, runners head the final 5 miles from Ascarate to the El Paso Coliseum, a multi-purpose arena that has been used for concerts, rodeos, boxing, ice skating and hockey, and even dog shows and flower shows.
This year will mark the 17th running of the marathon, which at various times has now been held in nearly every neighborhood of the El Paso region.

Held on the same day as the Raiz Federal Credit Union Half Marathon and the Spine & Rehab Specialists 5K, the marathon and its associated races have attracted runners from nearly every state in the United States and from countries as varied as Mexico, Norway, Liberia, and Germany. 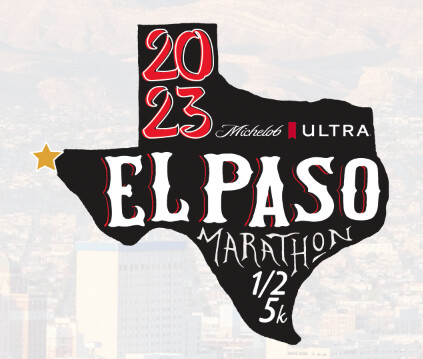